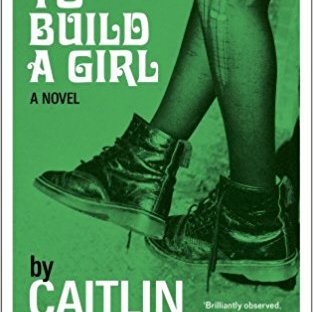 How to Build a Girl by Caitlin Moran

If you follow my instagram, my twitter or my goodreads (you should do – scroll down to the bottom of the page *wink wink*) or if you’ve seen my new avatar on here lately, you’ve probably noticed that I’ve been reading How to Build a Girl.

In case you haven’t guessed, I really liked How to Build a Girl. A lot. I just really like Caitlin Moran, and feminism. So, this book was pretty great for me.

This book follows the character of Johanna, who lives with her four siblings, her mother (who has post-natal depression) and a wannabe pop star father on a housing estate in Wolverhampton.

The basic premise is that Johanna doesn’t like herself, so she goes about reinventing herself into a new person; ‘Dolly Wilde’, after Oscar Wilde’s lesbian niece. She does this through getting herself a job at a music publication, having a lot of sex and becoming a goth – to name just a few.

Like I said previously, I loved this. I devoured it in a couple of days and hung onto every single word. I do own Caitlin Moran’s How To Be A Woman, although I haven’t read it yet (but I definitely plan to, ASAP).

I’ve been getting into feminist fiction a lot more recently, so I feel like I can properly recommend this to you? It’s very funny, for one – something that some feminist literary novels can lack, in my opinion. It’s also very accessible, although I’m sure if you’re under fourteen then you’ll have people telling you over and over again that you aren’t allowed to read ‘books like this’.

You know, to hell with them. When this book starts, Johanna is fourteen. And she’s so telling of every other teenage girl her age, even though she thinks she’s weird. One of the main themes of the novel is that it isn’t worth changing yourself to please other people – which is so. Incredibly. True.

In conclusion, I can really, really recommend this book. Seriously. Go read it. You’ll see what I mean. This was a strong  5 stars from me.